If you follow the blog, you've seen all the pictures Robyn posted of Talon and Cassidy's visit last Saturday. The sun, the fun, etc...

What she left out was the burning eyes, the ruined clothes, the screaming that followed.
When we were done in the backyard we brought the kids in to clean them up and have some ice cream.
So the plan was bath and change all four kids, then eat ice cream. Simple right?

Well it would have been simple if I hadn't turned into Mr. Bean.

Robyn bathed the boys and stuck the girls in the tub, then asked me to go to the basement to get the ice cream. We have a small apartment-sized freezer downstairs in the laundry room. The night before I had put a big garbage bag full of ice cubes in the freezer, right on top of the ice cream. The ice in the bag had settled around the ice cream and against the walls of the freezer and the froze into a solid block. When I tried to lift it out it wouldn't budge. I needed something big and heavy to break up the ice...

This is where I got stupid.
Did I grab a h

ammer?
Or a broomstick?
Or head-butt it?
No I grabbed the nearest thing... a jug of bleach.

I lifted it, and slammed it down.
Nothing happened.
I lifted again, and slammed it again.
Something happened...
All I saw was the lid flying straight up in the air, and bleach coming straight at my eyes.
The first thing I did was yell at Robyn that I needed help, which she could not give because she had two babies in the bathtub and couldn't leave them.
But she did say, "How much damage to the clothes?"

My first priority was to protect my cell phone and other electronics in my pockets.
I stripped naked and set my phone and pants(the shirt had bleach all over it) where they would be safe.
I then decided to rinse my eyes.
We have a bathroom with a shower right around the corner from the laundry room.
Robyn said to rinse for 10 minutes.
I rinsed for 3 minutes,
then I started worrying about my other priority: Is the ice cream OK?
So I got out of the shower, ran dripping into the laundry room and picked up the jug and replaced the lid.
Then I set it back onto the table it was sitting on in the first place.
The ice block had a slight indentation from the jug which had a little puddle of bleach in the center.
To protect the ice cream I grabbed a towel to soak up the bleach.
Once I cleaned up as much bleach from the freezer as I could I tried to lift out the ice block.
It didn't budge.
Now my eyes were kind of burning, so I decided to rinse some more.
After a few more minutes of rinsing, I started thinking Robyn would be coming down soon to assess the damage so I hopped out of the shower dripping and tried to start cleaning up.
I decided that the ice block HAD to come out of the freezer.
I grabbed the little step ladder (which I should have used in the first place) and started beating on the ice.
It finally broke up.
I didn't know how much bleach was in the bag, so I wanted to get it out of the freezer and into the bottom the the shower. As soon I lifted it, the bottom of the bag gave out and started dumping ice cubes everywhere. I ran with it to the bathroom leaking cubes, shower water, and possibly bleach the whole way.
After dropping the bag into the shower, I ran back into the laundry room to try to save the ice cream(and other food) from bleach.
I was wiping liquid(bleach? water?) and ice cubes from inside the freezer, when I heard dripping.
I looked at the table with the bleach jug and saw that the entire table was a puddle of bleach with a little waterfall of bleach pouring over the edge. Apparently I had broken the bottom of the jug.
I grabbed an empty bucket and stuck the jug inside the bucket and set it in the bathroom sink.
By now Robyn was started to get really curious about all the yelling, running, showering and banging sounds and the overwhelming stench of bleach, so she planted all four kids in the living room and headed downstairs.

She found:
Me naked with red eyes trying to mop up a puddle with a dark red towel(already turning white),
water, ice and bleach spread from one end of the basement to the other,
a bucket of bleach in the bathroom,
the freezer open, and bleach spots on a lot of the clothes
(including her good $ 300.00 winter jacket).
the cat playing hockey with ice cubes.
With a perplexed look on her face she asked, "Why didn't you just move the bleach off the freezer before you opened it?"
She generously thought I was half smart and just dropped or spilled it.
I just said, "Actually, I did something much dumber than that, and I don't want to talk about it right now."
To her credit she dropped it.

I took another 3 minute shower because my eyes were burning again, then Robyn sent me upstairs to watch the kids.
By the time I had my pants on, I heard crying from upstairs.
I came into the living room and found that Jeremy had Talon pinned down backwards on top of the toy box and he was bawling.
Then Cassidy took one look at me and started crying, which started Autumn crying.

That was when I heard Robyn yelling that she tried picking up the bucket/jug of bleach and her dress was soaked in bleach.
(She didn't know the whole bottom of the bottle was gone...)
This when my phone started ringing,
it was Krystal worrying about her kids and wanting to see how they were doing.
With both of them screaming on either side of me I just hung up on her.
Eventually we did end up having ice cream and I took the kids home, only 45 minutes late.
I didn't tell Robyn the whole story until much later that night, to which she said, "Either you blog about it, or I will."
Oh well, this is probably the cleanest the basement floor has ever been! 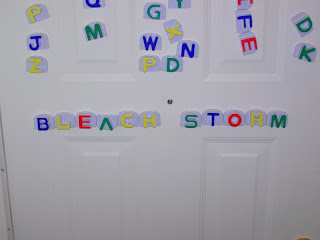 Kendal, you are my HERO! That is an awesome story! I'd love to make a movie re-enacting it. It would be hilarious (except in my movie you would leave your underwear on because I want it to be family friendly...). Thank you for sharing that story. It made me laugh. I will be sharing it with all my friends.

nasty, nasty, nasty... especially the mental picture it left me with! glad that kendal is ok but you could seriously win some cash by submitting this one :) thanks for sharing the laugh!

hahah I couldn't help but to laugh, as I'm sitting here at my desk.

Kendal Les and I had a great belly laugh at your story! You really need to get this published if only for cost recovery for towels, jackets, & clothes lost. You could be a writer... this story would give Phil Callaway a run for his money! LOL!!! Thank you for sharing and hope you are recovering ok!!

I guess the bleach finally got the green off your....story for another time.

I guess the bleach finally got the green off your....story for another time.