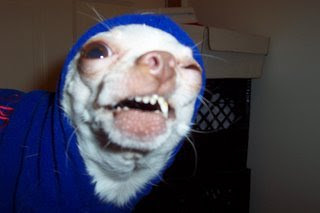 OK...so i posted this before, but it's a Chihuahua! That is always worth posting for!

I think that the world should revolve around chihuahuas. I have one. His name is Mr. Bell. ( Guess why?) That would be Taco to his friends...

This is him licking his own nose! If we did this, it probably wouldn't be socially acceptable, but it would save a lot of money on kleenex! He does a lot of other socially unacceptable things too, but we won't talk about those either!

Taco is two years old now. We weren't really looking for a dog at the time, especially not a $500.00 dog, but he was a gift from a friend of mine, who felt bad for me when my other chi was hit by a semi. We were actually looking for a Pom cross, but for some reason the kennel owner brought Taco with him as well, (just in case we might be interested!) When I stuck my head into the box to look at him, he jumped up and bit my nose, and that was it...I was in love! Even though I was driving, he didn't want to sit with anyone else the whole hour home.

Training him has been a lot of fun. He is very smart, and like my other chi can do all kinds of tricks, but the funniest is when he crawls on his stomach from one end of the room to the other! Guaranteed Party Pleaser. (we know...when the party is going no where...we've tried it....we have really boring parties! )

The nose biting thing is pretty funny too! The first time my friend Krystal looked into the play pen, where he lived his first couple of months, he jumped up and bit her nose too! Only he didn't let go. Funniest thing I have ever seen in my life was my girlfriend with a baby chi hanging off the end of her nose while she jumped up and down screaming!

He's an adult now, and he doesn't do it much anymore---except to my husband---Kendal can't sit down without the chihuahua attacking his nose! Maybe Taco is trying to say something dear......kidding....

When he isn't eating, he sleeps (Taco, not my husband....hmmm...) If he could sleep 24/7 I am pretty sure he would. If I sit, he is on me sleeping. I was sick for a week once, and all he did was sleep the whole time. When I got better, he seemed dissapointed.....

The only real problem we have with him, is that we live in Sask. and it's freakin cold. Far too cold for a little Mexican dog with no hair!

Did you know, that Chihuahua's apparently used to live in the wild in Mexico? They sleep in holes in the ground, and people used to eat them.

That was my useless piece of info for the day.

Life must be great as a chihuahua. People carry you all over, and all you do is sleep and eat.

People say that they are cranky and they bark all the time, but I have had two now, and they were both the quietest dogs I have ever had, and if you socialize them properly, then they are also pretty friendly!

You can also litter train them. (NOTE TO SELF: after spending countless hours in -40 waiting for him to do his buisness I might want to do that next time!)

Apparently they also live for about 20 years. (if they aren;t hit by a bus. ) Which is kind of what happened to my other chi! --Kind of...

Here is another picture of my chi! 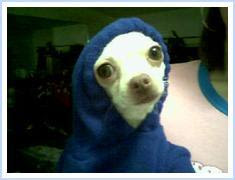 Do you have humorous pics of your favorite pet???