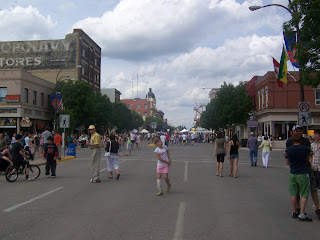 Sat. morning we decided that we were going to do SOMETHING fun...our origional plan had been to go to Katepwa for the day, but the weather didn't co-operate with us, so instead Kendal, Bree, Jeremy and I headed off to Moose Jaw, and hung around there. Unfortunately Brandy couldn't come as she was supposed to be working.

We had a really good time, which was nice, because I think we were all ready for a break...except for the twenty minutes when we had to park on the side of the highway so that I could nurse Jeremy...outside of the car by the way...because for some reason he decided that nursing in the car wasn't cool....???

When we arrived in Moose Jaw, we discovered that there was actually a street fair going on...There were little kids games set up all over the street, and all of the local stores were selling stuff outside...

We went to our favorite haunt in Moosejaw...the Chocolate Moose...and had some of their Italian ice cream....Man is that stuff ever good... Here is a link to their store...If you ever head out this way...make sure you check it out! http://www.fudgefix.com/

Jeremy had to be content with laughing at the little teddy bears on the shelf behind us....

Finally we tired of looking at everything the stores were selling and headed back to the car. We decided that we were going to go on Captain Jack's River Boat Tour! We were glad we did, because it was a lot of fun.

it was 14$ for adults and 12$ for kids, and worth every penny....except that for a minute we really thought he was going to try and charge us for Jeremy...LOL!

"Captain Jack" gives a running history of the river as we cruise down it, and I was quite impressed with how much he knew.He kept us entertained with many amusing stories about his childhood on the river as well.He is quite the "showman"...Bree was nervous every time the boat was tippy...(which Kendal and I found quite funny) Apparently so did he, because the boat tipped on several of the turns far more then I know it needed too....LOL!
I have included a short video clip here for you to get the flavor of the tour.

Captain Jack gives tours from 10am to dark. It is probably a good idea to reserve your tour though, as during good weather he gets a little busy!

There are also ALOT of pics which I will post from the tour. Bree is her mothers daughter, and with a digital is actually worse, because you can take even more pictures. She has a really good eye for it though, and really loves it....

After the tour, we went for supper to this hamburger shack along the side of the river...They had a really cool little picnic area, and really good food...(or maybe I was just hungry...) We really enjoyed it there anyways. Apparently it was also very popular, because it was really busy. By the time we got home, it was around 9.30.