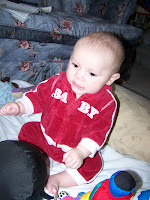 I just posted something on Talon's site.

Posted by Kendal at 8:05 PM No comments:

My trip to Ottawa! 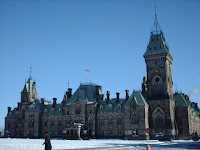 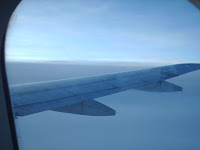 Hey guys well this is Brandy About a week ago I got the amazing chance to go to Ottawa for an experience of a life time It was called Encounters Canada! I went for a week and I got to learn all about the R.C.M.P I also made some totally awesome friends I don't think In my 16 years of life I have ever met people that have treated me so well. Ok so this is how my week started out :) I had to wake up early to catch my plane so we went to the airport and I was getting a bit nervous..because I have never taken a plane before it was insane! So I got on the plane and got into this tiny plane holy moly it was so small and I kind of felt a little claustrophobic it got allot better once I sat down though, except on my way to Calgary the old man next to me kept hitting on me I couldn't believe it! it was sick! 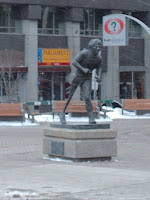 so I was like " yeah, I'm going to listen to my mp3 player now " and then I stared out the window the rest of the trip :) When I got to Calgary i was so Amazed! I have never seen something so big in my entire life! It was great and thats where I met Jade she was also going to Ottawa for Encounters Canada! we became friends very quickly seeing as how I am not very shy :P We talked and talked the whole flight! She was quite the nice person! So when we got to the Ottawa Airport we found the people who were taking us to the Terry Fox building! it was so funny but no one talked a word on the bus and there was 22 of us! I believe I was the only one talking :P 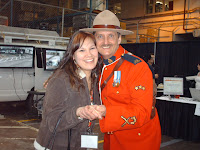 everyone seemed so shy :p when we got there we each went to our dorms boys separated from girls of course and thats where I met Sam and Amanda they were my dorm buddies it was awesome bunk beds everywhere :P and we could talk to every other girl around us which was liek 50 imagine trying to go to sleep with 50 girls giggling and talking at once :P well I decided to take a quick shower and run downstairs and Amanda and Sam were playing cards at a table so I decided to join that also when I met Josh Kayla, Morgan, Chris, Susan, Josh R., Alex 1, Alex 2, and Kathleen they were the best all week! SO the first thing we did was play ice breaking games! it was hilarious! I don't think I have ever seen teenagers laugh so hard before:P they sent us to bed at 10 and everyone was already the best of friends they said there good nights everyone and passed out . 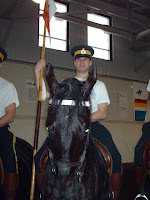 The next day we went to the Parliament building and we saw so many beautiful pieces of art the whole building was practically a piece of art! first we went to the Sennet and sat there for about an hour and listened to a lady talk I have to admit it was quite boring :P well we took lots of pictures after that and we were off to the house of commons! woah It was so cool I saw Steven Harper, Ralph Goodale, and the Governor General! I was so amazed and someone even called Steven Harper a Pric :P hahah I'm sure My grandfather wouldn't have minded because before I went he told me if I saw Steven Harper I was to tell him off :P well I didn't get nearly close enough however I am 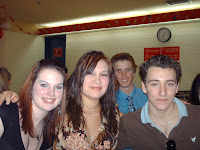 happy i got to watch a question period! we also went on a tour of the building after and thats when we got to see the peace tower! woah you could see the whole city and the hull as well! ahh Quebec was beautiful to! So that took a whole day and it was so tiring we went back and all ate supper together again it was fun after supper they took some of us swimming and some of us on a walk Josh, Chris and I all went swimming! we played water polo and just swam it was one of the best nights of my life and I didn't know more were coming! Once again we were so tired when we got back but we stayed up until ten and talked again (sigh*) I miss those nights ! The next morning 7:30 sharp we got up ate breakfast and was off to watch the R.C.M.P Musical Ride, Josh Is the 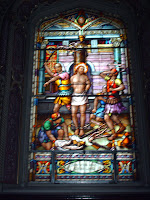 one that was the most excited! and he was snapping off pictures like crazy! I laughed and took a few to ;) it was fun I think It would be a great job! and after this weekend I would so Do it And I will one day! you guys just watch! the rest of the week we had the Deputy commissioner who is second in charge off all the R.C.M.P ! OI got a picture with him to that I plan on Framing! heheh yes I am so excited! the Next day we went on a tour of Ottawa and it was amazing! I saw so much The one thing I loved the most was steeple that was made entirely out of wood and stained glass windows! it is the most beautiful thing that I have ever seen...I don't even have words to describe it! Friday was our last day and night we would ever share together we wanted it to come and at the same time we dreaded it :( WE woke up at 7:30 again and ate breakfast and had free time! we all headed on the bus to go skating and shopping! so all of us 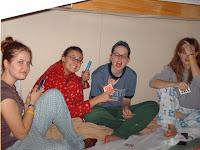 together decided to go skating first on the Routoe Canal it just so happens to be the biggest Canal in the world it was amazing! after that we all went to the mall and shopped out little buts off! after that we went back to the Terry Fox building and had a banquet! it was so nice They actually let us stay up all night and talk I had to leave at 4:30 in the morning and I have never been so sad to leave a place in my life even all of the boys cried :( I wrote all of them a warm fuzzy letter and they could not read it until they got on the plane all of them cried when they did read it on the plane ..:( I miss them, so much it almost hurts :( but thats ok I made about 100 friends all across Canada! crazy huh who can say they have friends all across Canada ! ME !!! muahahaha jk but I had the time of my life we all shared tears and laughter.. but the best gift all of those people gave to me was a smile ...no one there talked about eachother and everyone was friends. I learned alot from going there ..it helped me make my job decision and My self Confidence is Soring :D I loved the week I went to Encounters Canada and Those memories will definatley last forever! HECK YES! Infanite xoxo's! -~*Brandy*~- 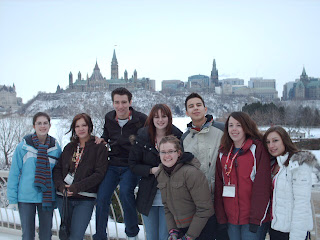 Just a reminder for those of you who have been trying to keep up with baby Jeremy's progress that he has a separate blog.....http://jllones.blogspot.com/
Posted by Robyn Jones at 8:05 AM No comments: