It's Lacy from the Ruby Restaraunt/ Corner Gas! 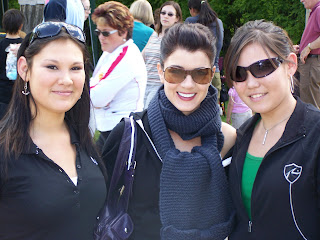 The locals of Dog River, Saskatchewan instantly suspect the worst when big city girl Lacey, inherits her aunt's roadside coffee shop. Will the dark haired beauty turn the town hangout into a gentrified coffee café, or worse still, close it down? Lacey's move to Dog River brings her into a world far removed from downtown Toronto.
Gemini-nominated actress Gabrielle Miller knew she wanted to act almost as early as she learned how to talk. The Vancouver native performed the lead roles in her Montessori School and by the age of eight she was enrolled in the children's theater group the "Green Thumb Players". Since then, she has appeared in several episodic series including Robson Arms, Frasier, The X-Files, The Chris Isaak Show, Jake 2.0 and Stargate-SG-1.
Posted by Robyn Jones at 7:55 AM No comments: