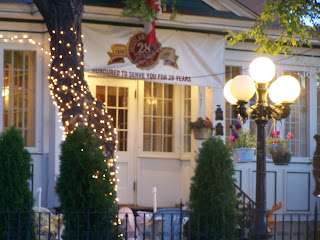 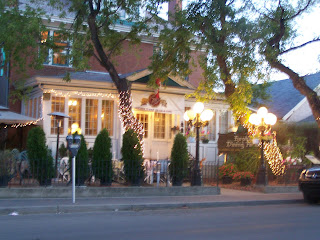 After we were done with the boat ride, we decided we wanted to go out somewhere nice for dinner...We tried asking a couple of people where a nice place to go for dinner was in Moosejaw, and were a little surprised with the responses...Someone actually suggested Bonanza....WoW!
We finally decided on a resturaunt called Hopkins...and I would highly recommend it to everyone if you ever go through Moosejaw...First off, it is gorgeous...it was built in 1905, and is decorated in a very Victorian style. Their food is also amazing, and very well priced for such a nice restauraunt. The service was also amazing...We got better service then a person normally gets now a days...but when Jeremy started fussing and the waitress offered to walk him, my jaw almost hit the ground! 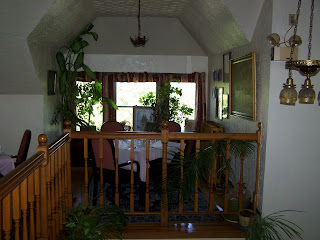 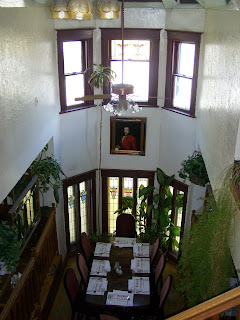 It also has atmosphere.....
It is reported to be haunted by the late owner of the house...a woman....and everyone who works there swears they have heard or seen things....They were actually featured on creepy Canada! They actually offer a tour. Kendal and I went back the following day to see what it is all about...I don't know about being haunted, but the decor is wonderful, and they have one of those pianos that plays itself...very cool.

Here is a link to the restauraunt... 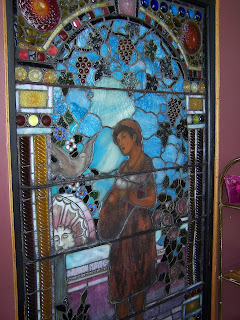 Here is an excerpt from Creepy Canada

Would you like gravy on that, hon? From The Minot (N.D.) Daily News:

Glady Pierce has added history, ambiance and the paranormal to attract visitors to what has become one of the most successful restaurants in Saskatchewan.

Pierce, the owner of the Hopkins Dining Parlour in downtown Moose Jaw since 1978, was recently featured on national television, not about the food or the history of the building, but about a ghost that allegedly continues to roam throughout the three-story mansion.
Pierce and her Victorian restaurant were recently featured on the CTV prime-time show “Creepy Canada,” which presents episodes of the paranormal. The segment aired during the 2003-2004 season, but Pierce keeps a video of it on site and shows it to visitors in the lounge.

According to employees who work for Pierce, the Hopkins house is haunted by the ghost of Minnie Hopkins. She was the wife of territorial homesteader Edward Hopkins, who built the structure in 1905, the same year that Saskatchewan became a province.

Make your reservations early. The dinners are to die for.
Posted by Robyn Jones at 11:05 AM No comments: