Day after the Big Storm.... 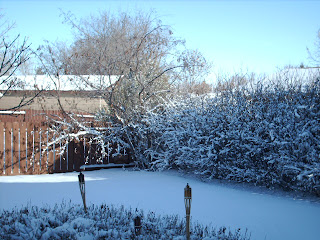 Will All the Wives Hate Me????

This is what my friend Corie is asking right now!!! She and her hubby got a big screen tv. on the weekend....It is pretty sweet....We watched a movie on it on Monday night when we went over there for supper...(BTW Corie if you read this supper was really good...) Superman Returns is so much a better movie when seen on a big screen...LOL!
The point is though, that now all the other husbands....after staring with lust at Scott's new tv...all want one!
Our friend Paul told Kendal that I should convince Tammy to let him get a big screen....I just snorted....so they decided that I probably wasn't the best candidate to convince her..because of my pesimistic nature and all.....
Kendal did his best though, telling Paul that they wouldn't need to finish renovations in their family room...because after all...who would be looking at the holes in the wall when their eyes were fastened on a great big new big screen tv.....Somehow I don't think that will cut it with Tam though....LOL!
Our other friend was turned down by his wife after a sermon from our pastor one Sunday....
Personally...I won't hate you Corie...but I am jealous....LOL!
I like to watch movies...and the bigger....the better!
Posted by Robyn Jones at 7:18 AM 2 comments: