Thanks for the e-mail. that is very kind of you.Yes, this year has gone by
fast. I have Josh and Jeremy's pictures side by side, and look at them and
wonder why. But there is only one person who knows that. I still do security
work and Jeremy is always with me. I have sent a picture of the kids, i
don't know if Donna has sent any, so I thought you'd like to see them.
Leroy,Rose and daughter Lisa with Donna and the kids have gone to Stanley
Park in Vancouver for the day. So they will have their time for themselves.
The sun has been shining with light showers, but all in all they are
to-gether.
Thanks again Kendal
All the best to the family
Mary

Posted by Kendal at 7:05 PM 0 comments Links to this post

I wanted to put a post up on the net but I just didn't know what to say....
I can't believe it has been a year... I know what you mean about people
saying or doing something that reminds you of Jeremy. And then I also think
that he hasn't been in my life for awhile, and I go onto his blog and read
things and look at pictures and everything comes flooding back and I
remember all the great times we had over the years and it just starts to
hurt all over... I can't even think about what it is like for Jeremy's
family. I am glad that you sent out this post and added the pictures....
They make me laugh and make me cry and It is so good to remember!!! Jeremy
was one of the best friends I have ever had in my life and I can never
replace him, but I can keep his memory in me and all the great things he
represented.... I truly believe having him in my life made me a better
person.

Posted by Kendal at 6:52 PM 0 comments Links to this post

Today it has been one year since Jeremy been gone. I still miss Jeremy a lot and think of him daily. Some days are harder than others. Robyn and I found out we were pregnant about a month after we came back from his funeral. That day was probably the best day of my life, and my first reaction was to want to call Jeremy and tell him. We were in Williams Lake right after Judah was born, and got to see him, and hold him, and see Jeremy proudly holding him. It was such a blessing. Knowing Jeremy would not get to share that with us was hard.

Before Jeremy died we told him we were trying to have a baby, and that if it was a boy we were going to name him Jeremy. When our Jeremy Liam was born on Jan 10, we deeply missed Jeremy and wished he could have been there. Recently on March 31, when the two year anniversary of Josh' death came and went that was also a hard time.

Birthdays, anniversaries, Christmas, etc... are all times where you miss people you've lost. Sometimes a song will come on the radio or someone will make a comment that reminds me of Jeremy and I will find myself getting teary- eyed. Recently I was showing off some pictures(in my cell phone) of our baby to people at work. We came across this picture of Luke Skywalker. They wanted to know why I had Luke Skywalker in my car and I had to tell them the story.

Jeremy used to have this hanging from the rear view mirror in his Blazer. Whenever you went anywhere with him he'd suddenly say, "Loook!" and point in the general direction of Luke. You would say, "What am I looking at?" and Jeremy would look at you like you were a little slow and reply, "Luke, you know Luke Skywalker..." So one day we were driving down the highway and I pointed out into the field and said, "HEY!" Jeremy looked out and said, "What?" To which I pointed to the hay bales in the field and said, "Hay, you know hay bales..." Later Robyn took Luke hostage and never got around to returning him.

Just telling the story at work brought back so many memories, that I had to fight back tears.

If it is this hard for Robyn and I, I can only imagine what Donna, Rose and Leroy are going through.

Donna, Rose, and Leroy, we just want you guys to know that we haven't forgotten and we are thinking of you and praying for you.

Jeremy we miss you a lot.

Posted by Kendal at 9:25 AM 0 comments Links to this post 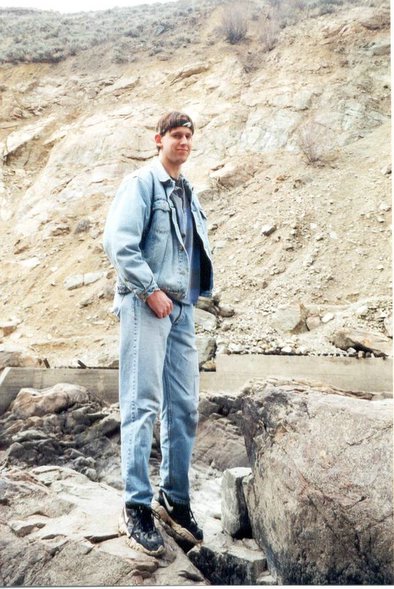 Posted by Robyn Jones at 9:36 PM No comments: