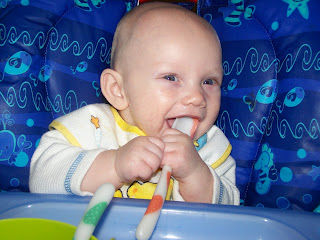 Jeremy is eating solids now...sort of. When I mean sort of...I mean that he only eats w 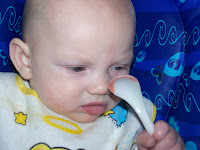 hen he feels like it....He prefers to nurse, so he has to be in a really good mood to actually touch it...and then he wants to feed himself...which gets really messy. I have taken to giving him his own spoon to play with just so that I can actually feed him with the other one. So far he is only eating simple grain cereals (rice, barley, and oatmeal) and peas. He will only take about a teaspoon of whatever food it is...and half of the time won't finish that...He would much rather smear the food on his highchair or face...or me. Whatever happens to be closest....LOL! 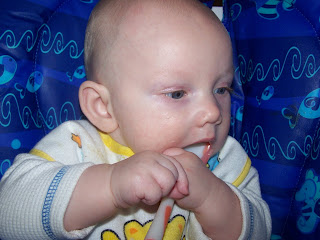