A few days ago, I mentioned that I was going to make some drastic changes in what i ate... 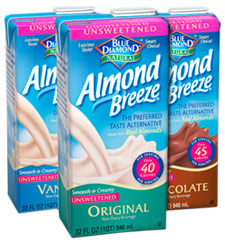 Well, the first of those changes is switching from Cows milk to Almond milk.
I have always kind of had issues with cows milk...
Jeremy is lactose intolerant, and it gives him the runs..
and my older girls always complained it made them feel bloated and sick.

About 20 years ago it started making me feel kind of sick and gassy,
and I have just never felt quite right about drinking it,
but the alternatives didn't do much for me.
At least I liked the taste of Cow milk...
but Soy milk really discusted me..
(and I have since researched and come to believe that Soy isn't really great for us...)
I tried Rice milk as well... It had a much milder taste, but I still couldn't do it...
Then... a few weeks ago, we had a lady at our church
come in and talk about foods, and what they could do for us,
and what she believed we probable should and shouldn't eat.
I found it pretty interesting... and although I don't think I can go as far as she did
with the health food thing... I was already planning on making some serious changes
so she gave me "food" for thought... (Hehe bad pun...)
She offered up Almond milk as an alternative...so I tried it...
and I liked it!!! I haven't touched milk since... (except in my coffee...)
Then I heard something on TV about what is in Cow milk...
and that kind of made my decision final...
(after it made me sick...)
The best part?
My kids LOVE it! Jeremy BEGS me for "Nut" milk as he calls it...
We have it on cereal, and by itself..
It is great!! They also make it in vanilla and Chocolate..
which might make my kids happy...

You can buy Almond milk at Superstore,
or if you live in Regina you can buy it cheaper by the case
at a really cool store called
Body Fuel Organics..
Check out their website...
They sell Almond Breeze.... Good stuff!
They also have all kinds of other organic foods and vegies...
and some cool Bin programs going on.

Check in with us on Tuesday
When I will be comparing the benefits/ Negatives
of Almond milk vrs....Soy

Have a great weekend, and Happy Turkey Day!
Posted by Robyn Jones at 10:04 AM No comments: