1. Jeremy LOVES computers. He is always trying to get on it, when one of us is on. He has figured out that buttons do THINGS. Said things usually screw up the computer...but that is ok..it is all fun and games for the boy...We actually had to get his own keyboard for him so he would leave ours alone...
2. Jeremy also loves MUSIC. It is a toss up over which he loves more. Computers or music. Music was one of his first words. He knows the sign language for the word music, and actually asks me to put music on. He knows where the stereo is, and points to it, and has since he was about 6 months old.
3. His two favorite songs are 1) Thank India byAlanis Morrisette and 2) 1234 by Feist 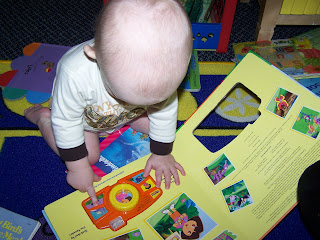 4. Jeremy also really likes books, and spends lots of time with them..carefully turning the pages, and looking at all the pictures. 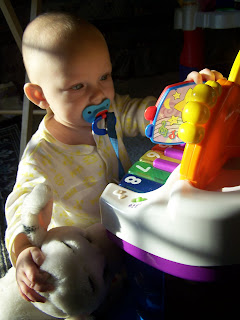 5. When he does play with toys, his favorite one is his piano. 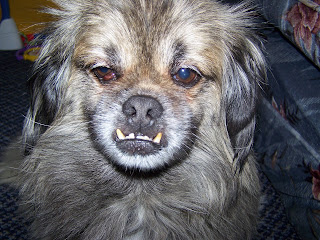 6. Jeremy loves puppies, and gets very animated when we let the dogs out to play with him....
7.Jeremy stood up for the first time when he was 8.5 months old, but has only ever walked around furniture. He is 13 months old, and still hasn't left the furniture.
8. He thinks it is really funny when people sneeze...and laughs his head off.
9. He started talking very young...words at 6 months. Now he says three word sentences like "I don't know" and "Shub up Gibo" (shut up Gizmo...) 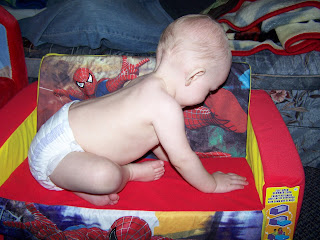 10. He loves Itsy Bitsy Spider, because I used to sing it to him when he was 3 months old. He used to do the actions in his sleep at 4 months. Now it has morphed into spider man. He LOVES spidey 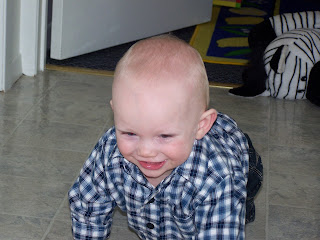 13. He was 5 weeks early, but has so far done very well and proved wrong all the dire predictions from the pediatricians who said he would develop slower then other kids....(someone should probably tell him.)

and if it sounds like we are a little obsessed with our son....it is because we are.... :)