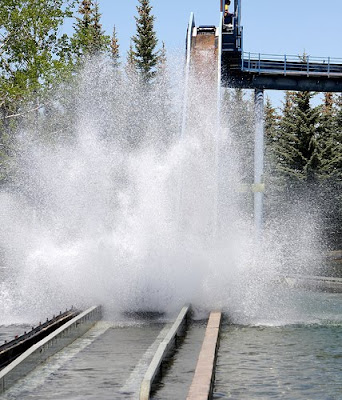 When we went to Callaway Park, the first thing I said to Robyn was, "at least I won't have to go on the log ride." Hmm.

If you've never been to Callaway, the log ride is a log shaped boat which takes you through a river course and drops you off a waterfall and gets you good and wet at the bottom.

I told Robyn I didn't really want to get wet and Jeremy probably wouldn't meet the height requirements anyway. Hmm.

The day we were there a lot of rides and attractions were shut down, due to some event happening in Calgary. So when we wandered in between a closed food stand and an abandoned game kiosk, we didn't really know what we were getting into. At least I didn't know what I was getting into, my wife may just be slightly devious.

We saw some people lining up for something, and Robyn said, "I think there is some kind of train ride back there." Jeremy had been asking for a train ride since we walked in the gates. He took the one at the zoo the day before and wouldn't stop talking about it. So I innocently followed Robyn's lead towards the "train" ride.

The lining up area was set up for hundreds of people to wait in line, which made me wonder why they had set aside so much area for some little kids train ride. It wasn't until we got almost to the front of the line that I realized we were in line for the Log Ride. Of course Robyn said, "Oh no I can't take Autumn Grace on that, but now Jeremy's all excited to go on it. Also there are too many people behind us to go back." Hmm.

When we got to the front of the line, the 15 year old moron running the ride asked if we wanted our own boat. Sure, sounds good. So I asked him if you get more wet at the front or the back. He said, "I dunno, probably the front."

So I got in and sat at the back with Jeremy right in front of me. I looked for a seat belt or restraint of some sort, no such luck. The seat is a bench(still wet from the last victims) which goes right down the center of the boat, so you have to straddle it. The floor is smooth and wet, so there is nowhere to get a good foothold. The only thing to keep you in place is a handrail on either side, which Jeremy couldn't even reach. So I had to hold him in place with one arm while holding us both in place with the other. If the moron cared about our survival, he would have told us to sit at the front so I could brace us with my feet. I figured that out when we were about to drop over the edge, but it was too late. I grabbed the hand rail and almost squeezed Jeremy to death. To his credit he never screamed or cried, but I think he was scared. He kind of whimpered and grabbed my shorts and hung on for all he was worth. 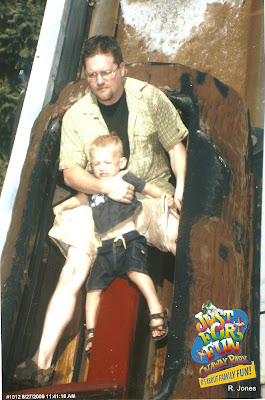 When we got out, Jeremy was kinda shaky and quiet. I asked him if he was ok, he said yes. I asked him if he wanted to go again, he paused and said yes. Just before dropping over the edge there is a sign that says, "Smile, you're on camera." As we exited we walked right past the photo booth and they already had our picture up on the monitor. We couldn't resist.

The beauty is next time we go Gracie will be big enough to go, and guess who's sitting at the front with her...
Posted by Kendal at 10:46 PM 2 comments: