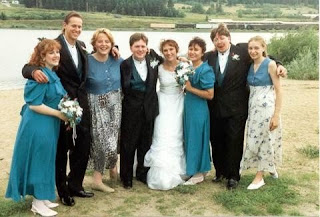 Wow! Hard to believe....11 years of marriage! Friday was our anniversary! Looking back, it is hard to believe how many things have changed in our lives....This picture was taken in Williams Lake, BC. Since that picture has been taken, Kendal and I have moved to Regina SK, had a baby, and had a billion other life changes.... ( If anyone had told us we were having any more kids, we would have laughed in their faces....)
LA...the redhead at the end (Kendal's sister) has moved and lives somewhere else now, and is married....The guy next to her is one of our best friends (Jeremy-who we named our son after) was also married, had two kids and he died of leukemia over a year ago. Tracy is married now and living up North, My maid of honor, Sheryl I lost track of years ago, but last I knew she was in Vancouver. Markie is in Kamloops working and has a girlfriend and Karen is somewhere in Alberta.

To celebrate our anniversary, we went out for dinner and a movie. We went to Brewsters. (Our 19 year old gave us money to go out....) We told her that we got drunk with her money....that elicited an interesting response! Of course we had to bring Jeremy with us, but we still had fun. It was a loud time though, because we forgot that the Riders were playing, and so the bar part was rowdy. That's ok though, because the Riders kicked butt. (Sorry Colin about BC losing....OK, I am not that sorry....)

After we had to waste some time before the movie, so we went over to Kendal's parents for a while so they could see Jeremy. (How romantic...that is almost as bad as having them listen on over a cell phone on your honey moon....) for those of you who remember that little story....hehe.

We went to see the Simpsons Movie. It was pretty funny, but I didn't get to see the whole thing, because Jeremy was being unusually cranky. I will have to watch it again to see the end. For those of you who haven't seen it? It is definatly worth seeing if you are a Simpsons fan, and lets just say that at one point you see far more of Bart then you ever have before....LOL!

We did have a really odd experience though....When we came out of the theater it was midnight. When we were in the lobby, we looked out, and the ground was shimmery. I thought that we were imagining things...but as we got outside, we realized that the entire parking lot was almost knee deep in water!! No one could believe their eyes. When we went in an hour and a half before, it was completly dry! It was like the second coming of the flood. It was pretty cool...However, at that time of night, it was mostly the 20 year old crowd, so there were some people being kind of dumb....One car decided to be funny and drive through the knee deep water and splash everyone under the eve of the theater....Two guys were really mad and took off super speed after the car! We thought they were going to beat the crap out of the guy, but they just missed him. We hydroplaned an the ring road all the way home. It was crazy...Kendal took a video, so whenever he gets around to putting that up, I will post it....You just have to see it to believe it....
Posted by Robyn Jones at 7:44 AM

Wow 11 years already. That's awesome! I remember you guys being just newly weds when Jeremy first introduced us. My how time flies. One day I'll be celebrating my 11th anniversary, but that's a long ways to go yet (2016).

Lynanne and her husband Lewis, live in Cranbrook, BC. Karyn Dell is now Mrs. Ben Jackson and they live in Calgary.
Happy Anniversary, Many Blessings.
From Kendals mom, Judy,
Yes, I'm still keeping my eyes and ears open!!!